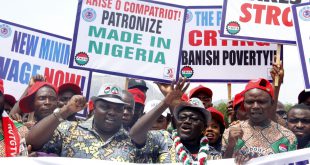 NLC SAYS NO TO THE SALE OF NATIONAL INVESTMENT ASSETS

OUR CONCERNS ON THE PROLONGED INCARCERATION AND CONTROVERSIAL TRIAL OF MR. AGBA JALINGO
I bring you fraternal greetings from the leadership of the Nigeria Labour Congress (NLC).
We write to express our concerns on the case of Mr. Agba Jalingo, a journalist and the publisher of Cross River Watch who has been arbitrarily incarcerated at the Calabar Correctional Facility since August 22, 2019 by the agents of Cross River State government. Citizen Agba Jalingo has also been subjected to a very unusual and controversial trial at the Federal High Court in Calabar, Cross River State.
We understand that Mr. Agba Jalingo, who was arrested subsequently after publishing damning reports against the Cross River State Governor, is standing trial on the charges of cybercrimes and terrorism. He has also been refused bail twice by the court. The trail of Mr. Jalingo’s travail appears to give off the scent of persecution and not prosecution. Such perception should not be allowed to thrive given that Nigeria is a State Party to the International Covenant on Civil and Political Rights and the African Charter on Human and Peoples Rights.
Without going into the merits or otherwise of the case, it is important to note that Agba Jalingo’s case is giving Nigeria a very bad reputation in the international arena as it has been construed that our government has scant respect for the fundamental right to freedom of speech especially of the media. It is important to correct the perception of persecution by putting in place both judicial and administrative processes of ensuring the release of Mr. Agba Jalingo from detention.
Our concern is that the government should demonstrate that it is only interested in the lawful prosecution and not persecution of Mr. Agba Jalingo. We, therefore, request that the Honourable Minister of Justice and Attorney General of the Federation should use his good offices and secure the release of Mr. Agba Jalingo as quickly as possible.
While we look forward to your diligent consideration of our request, please accept the assurances of our highest esteem.
Comrade Ayuba Wabba, mni
President
Cc: His Lordship, the Chief Justice of Nigeria

TheDetail is an online news based in Nigeria, a Division of Ovah Global Multipurpose Services.
Previous NLC COMMISERATE WITH BORNO STATE GOVERNMENT, OVER THE RECENT BOKO HARAM ATTACK ON AUNO TOWN
Next NLC expresses concern over the prolonged Incarceration and controversial trial of Mr. Agba Jalingo, Writes Attoney General,CJN